One of the United Kingdom’s leading exploration and production companies, Tullow Oil, has finally struck black gold in the Orinduik Block. In fact, Tullow’s Chief Executive, Paul McDade noted the discovery was made at the Jethro-1 well which could hold more than 100 million barrels of recoverable oil. 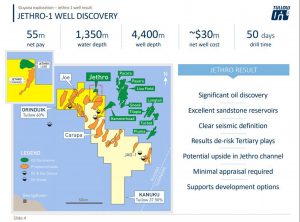 According to a Reuters news article, Tullow is also smiling from ear to ear as its share price jumped by 20 percent yesterday following the discovery.
The other two partners on the Orinduik Block, being Eco Atlantic and Total, are ecstatic about the find too.
Eco Atlantic in its release to the media noted that the Jethro-1 exploration well was drilled by the Stena Forth drillship to a final depth of 14,331 feet (4,400 meters) in approximately 1,350 meters of water. The company said that evaluation of logging data confirms that the Jethro-1 comprises high-quality oil-bearing sandstone reservoir of Lower Tertiary age.

The company said that it encountered 180.5 feet (55 meters) of net high-quality oil pay in excellent lower Tertiary sandstone reservoirs which supports recoverable oil resources. It noted that the well has been cased, and is now awaiting further evaluation to determine the appropriate appraisal activity.
Gil Holzman, CEO, and Co-Founder of Eco Atlantic was keen to note that he is thrilled about the exciting discovery, describing same as a revolutionary moment for Eco. Holzman said, “It has been a long path of hard work for our team, and with this announcement, we feel our first rewards have justified our journey. We have been very confident in the prospects of the Orinduik since we first decided to make a licence application in February 2014, based on a strong recommendation from our team at Kinley Exploration.”
Holzman further stated that he always believed that Eco would create exceptional stakeholder value for its shareholders and the people of Guyana alike.
The CEO added, “This is a transformational event for the company, and we now need to strategically plan for an even brighter future. With multiple targets to consider, and Joe as the next prospect to be drilled, we will now pursue our evaluation of the timing for wells to develop the Jethro field and to expediently bring it on production. We are funded for at least six additional wells.”
In sharing his thoughts on the momentous occasion, Eco’s Chief Operating Officer (COO) and Co-Founder, Colin Kinley, was quick to note that the Jethro-1 well confirms the continuance of the petroleum system onto the Orinduik Block, an up-dip from the prolific discoveries on the Exxon-operated Stabroek Block.
Kinley said that the well has resulted in a mitigation of risk of the presence of quality reservoir sands, seal and trap parameters. He also stated that the company has multiple drilling targets on the block with similar geophysical characteristics.
Kinley said that the company will be moving the Stena Forth drillship immediately to its next target, the Joe-1 prospect which is just a short move to a shallower target and is expected to spud mid-August.
The COO said, “The Orinduik Block, and the corner of the block where Jethro is located, were selected and pinned for drilling long before the first Exxon discovery. We appreciate the support of our partners from Tullow, Total, and now Qatar Petroleum joining our quest, as well as the support of the Government of Guyana and its belief in our team.”
Head of Guyana’s Energy Department, Dr. Mark Bynoe also commented on the discovery yesterday, stating that it represents a major development for Guyana as it adds to the further de-risking of the deep and ultra-deep zone. Furthermore, Dr. Bynoe said that it offers significant potential for the diversification of the CRG (Cooperative Republic of Guyana)’s hydrocarbon production base. Additionally, the official explained the well-encountered 55m of net oil pay which supports a recoverable oil resource estimate that exceeds Tullow’s pre-drill forecast.
“The Department of Energy is encouraged by the prolific rate of discovery in the CRG and will continue to work assiduously and conscientiously to extract optimum value from these resources for all the peoples of our country,” the Director said.

Dr. Bynoe also reiterated that this new discovery demonstrates the vastness of Guyana’s natural resources while reminding that Guyanese stand to benefit significantly from the oil discoveries and must, therefore, continue to be focused with a transformational mindset.

The Energy Department Head was keen to note that the Jethro discovery significantly de-risks other Tertiary age prospects on the Orinduik Block, which includes the shallower Upper Tertiary Joe prospect.

ORINDUIK JV PARTNERS
In January 2016, Eco signed a Petroleum Agreement and is a party to a Petroleum Licence with the Government of Guyana and Tullow Oil for the Orinduik Block offshore Guyana.
Tullow Oil as the Operator of the Block, paid past costs and carried Eco for the first 1000km2 of the 2550km2 3D Survey. Further, Tullow contributed an extensive 2D seismic data set and interpretation.
The Company’s 2550 km2 3D seismic survey was completed in September 2017, well within the initial four-year work commitment, the Company made for the initial 1000km2.
In September 2017, Eco announced that its subsidiary, Eco Atlantic (Guyana) Inc. entered into an option agreement on its Orinduik Block with Total, a wholly-owned subsidiary of Total S.A. Pursuant to the option.
Total paid an option fee of US$1 million to farm-in to the Orinduik Block. An additional payment of US$12,500,000 was made when Total exercised its option to earn 25 percent of Eco’s working interest in September 2018.
Following the exercise of the option by Total, the Block’s working interests became: Tullow – 60% (Operator), Total – 25% and Eco – 15%. In October, last, the Government approved of the Total farm-in on the Orinduik Block, which has the potential for almost three billion barrels of oil equivalent.
Just a few days ago, however, Total sold 10 percent of its interest in the Orinduik Block to Qatar Petroleum. The government is still to grant approval for this farm-in by Qatar Petroleum.

Monday to Friday from